Three and a Half Acres’ Seventh Annual Gala 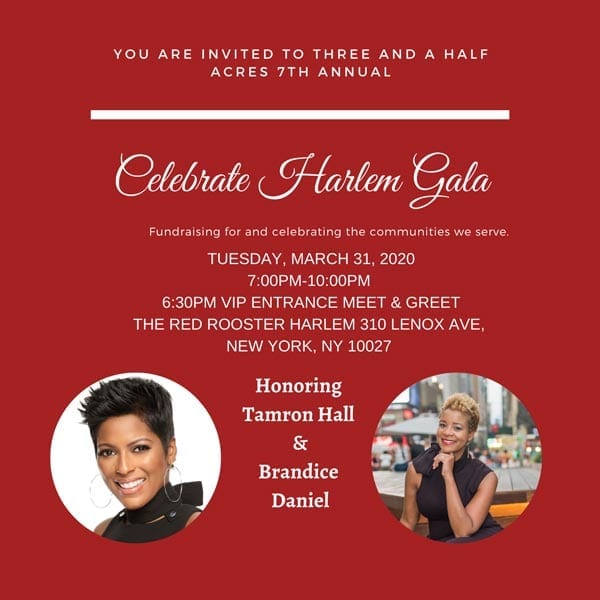 Please join us at our 7th Annual Gala Tuesday, March 31st 2020 to support Three and a Half Acres Yoga (“THAY”)—a non-profit organization empowering our communities through yoga, breathing and mindfulness techniques. Throughout the year, we use these tools to support individuals tapping into their own power for positive change. Now it’s time to honor those who make it all happen–and to support THAY in its ongoing mission to bring these tools to more neighbors and more communities!

All tickets include a Harlem-inspired dinner by celebrity chef Marcus Samuelsson, unlimited craft cocktails, and live entertainment. Come celebrate the hard work and success of our volunteers, our participants, and the communities we work so closely with. Surround yourself with Harlem’s finest and dance side by side with some of our communities’ brightest lights.

This year we proudly honor Tamron Hall, and Brandice Daniel.

Tamron Hall is an American broadcast journalist and television talk show host. She is the executive producer and host of the nationally syndicated daytime talk show, “Tamron Hall”. Hall was formerly a national news correspondent for NBC News, day-side anchor for MSNBC, host of the program MSNBC Live with Tamron Hall, and a co-host of Today’s Take, the third hour of Today. In addition, Tamron has hosted “Deadline: Crime with Tamron Hall” on Investigation Discovery since September 2013.

Tamron was the recipient of Temple University’s prestigious Lew Klein Alumni in the Media award in 2010 and in 2015, was appointed to Temple’s Board of Trustees. In 2016, she received an Honorary Doctorate from Peirce College and most recently she was a Variety Power of Women Honoree. She is involved with several charitable organizations that strive to end homelessness and illiteracy, as well as others that fight domestic abuse. She has been recognized by Day One, a New York-based advocacy group for victims of domestic violence, for her work and support and she received the Ackerman Family Advocate Award for her efforts to raise awareness for families who have a loved one experiencing abuse.

Brandice Daniel, CEO and Founder of Harlem’s Fashion Row, has over 12 years of experience in fashion ranging from retail, buying, costing, and production. In May 2007, Daniel created HFR and produced the first fashion show which received critical acclaim and a mention in Women’s Wear Daily.

We will also be recognizing our Superhero:

Presented by THAY’s Board:

2020 Honoree at this years
Celebrate Harlem Annual Gala on March 31st
at the Red Rooster in Harlem: 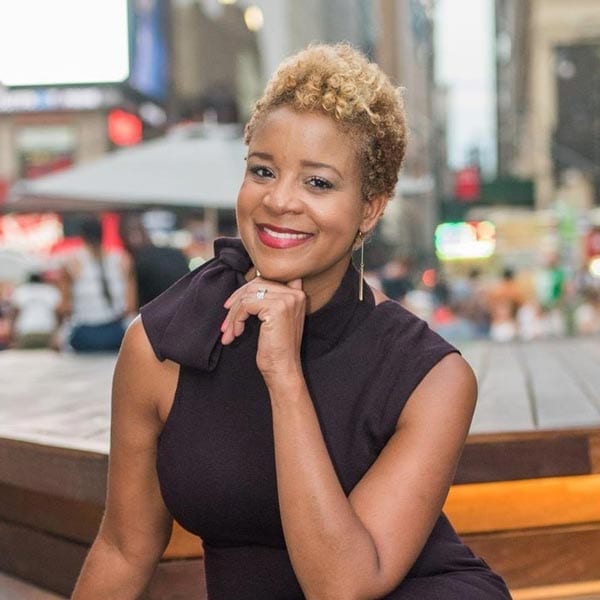 Brandice Daniel is the CEO and Founder of Harlem’s Fashion Row (HFR). HFR was founded in 2007 with the goal of providing a voice for multicultural designers. The company has had many successful brand partnerships, including TRESemme, OWN, ESSENCE, Prudential, Target, Marriott International, Smartwater, Coca Cola, Google, and Shea Moisture. During 2018 NYFW, HFR collaborated with Nike and Lebron James on the HFRxLB16 shoe, the first Lebron sneaker designed by and for women.

Above all, Brandice is an entrepreneur, author, wife and mother. Just this year, she presented a Ted Talk with TedX Memphis and starred as a guest judge on Project Runway. Brandice has also been featured in the Wall Street Journal, the Strahan and Sara Show, NBC Black She Thrives, CBS NY, Vogue, GQ, Paper Magazine, New York Times, Forbes, TeenVogue, Essence.com, BET, and the CFDA’s website for her efforts in increasing visibility for designers of color. 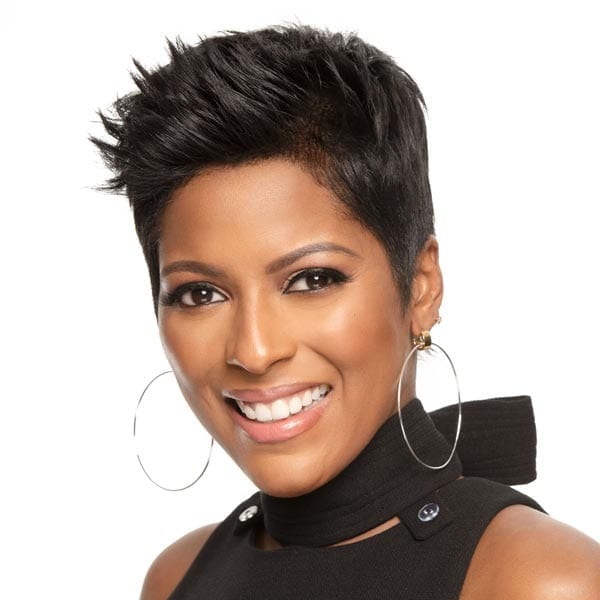 Tamron Hall is an accomplished TV host, award-winning journalist and philanthropist. Her highly anticipated syndicated daytime talk show entitled “Tamron Hall” premiered across the country on Monday, September 9 with impeccably strong ratings. “Tamron Hall” is a daily destination for all things topical and a platform for viewers to connect with the people who are shaping our world through meaningful, engaging, and entertaining conversations.

Since 2013, Tamron has hosted “Deadline: Crime with Tamron Hall” on Investigation Discovery, taking an in-depth look at crimes that shocked the nation. The sixth season of the show is slated to premiere in fall 2019. She also brought her signature reporting style to “Guns On Campus: Tamron Hall Investigates,” a special on Investigation Discover that explored the importance of securing one’s personal safety on public property. In a powerful interview, Tamron brought two survivors together to present both sides’ positions behind this controversial debate.

Previously, Tamron co-hosted the third hour of “TODAY” and “TODAY’s Take” for three years and anchored “MSNBC Live with Tamron Hall.” She received the 2015 Edward R. Murrow Award for Reporting: Hard News in Network Television for her segment on domestic violence as part of “TODAY’s” Shine A Light series. She has hosted several special reports for MSNBC and NBC News, including the Emmy-nominated “Education Nation: Teacher Town Hall,” and she served as a correspondent for the NBC News special “The Inauguration of Barack Obama,” which won an Emmy for Outstanding Live Coverage in October 2010.

Prior to joining MSNBC in 2007, Tamron spent 10 years at WFLD in Chicago, where she served as an anchor, general assignment reporter, consumer reporter and host of the three-hour “Fox News in the Morning” program. While there, she secured a one-on-one interview with then Senator Barack Obama shortly before he announced his presidential run. Tamron was nominated for an Emmy for her consumer report segment, “The Bottom Line,” which she launched in 1999. Before joining WFLD, she spent four years as a general assignment reporter at KTVT in Dallas, and she began her broadcasting career at KBTX in Bryan, Texas.
Tamron was honored with Temple University’s prestigious Lew Klein Alumni in the Media Award in both 2010 and 2015 and was appointed to Temple’s Board of Trustees. In 2016, she received an Honorary Doctorate from Peirce College and most recently she was a Variety Power of Women Honoree. Tamron is an active member of the National Association of Black Journalists.

Tamron is passionate about many causes, including domestic violence, homelessness and literacy – dedicating her time to many deserving organizations over the years. She is an ambassador for Safe Horizon, a domestic abuse organization which also honored her with their Voice of Empowerment Award in 2014. She’s partnered with Safe Horizon previously to launch The Tamron Renate Fund in honor of her sister to help victims and families affected by domestic violence. Day One, a New York-based advocacy group for victims of domestic violence, honored her work, and she received the Ackerman Family Advocate Award for her efforts to raise awareness for families who have a loved one experiencing abuse.

Tamron is a native of Luling, Texas, and holds a Bachelor of Arts in Broadcast Journalism from Temple University. 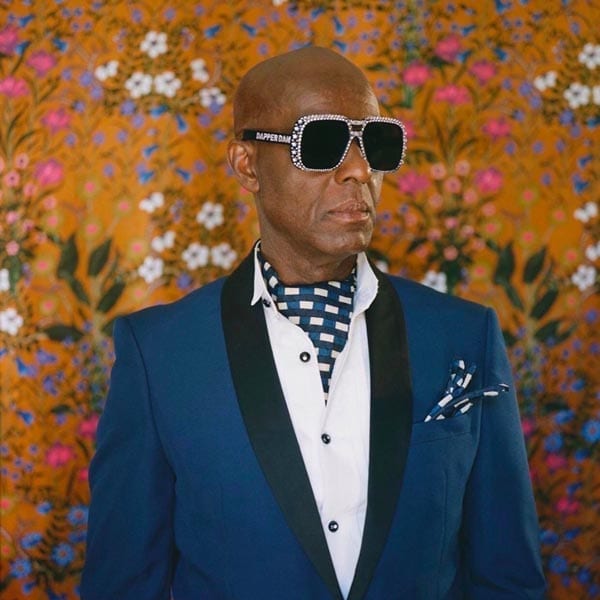 Fashion Innovator
With his eponymous store on 125th Street, Dapper Dan pioneered streetwear in the early 1980s, co-opting luxury branding to design original garments with high-end detail. Known for using exquisite leathers, furs, and other fine materials, he first drew powerful New York City hustlers as clientele, who all came due to his strong street reputation as a legendary professional gambler and dandy. He then went on to outfit entertainers and other celebrities, including Eric B. & Rakim, LL Cool J, Salt-N-Pepa, Mike Tyson, Missy Elliott, JAY-Z, Beyonce, Aaliyah, P. Diddy, Floyd Mayweather, and many more. Dapper Dan has been featured on platforms including The New York Times, Elle, Vogue, W, Vanity Fair, The New Yorker, CNN, and Netflix. His works have been on display at The Smithsonian, The Museum at FIT, The Metropolitan Museum of Art, and The Museum of Modern Art. Dapper Dan’s boutique reopened in 2017 in a major partnership with Gucci. His memoir, “Dapper Dan: Made in Harlem” was released via Random House on Tuesday, July 9th, 2019 and is a New York Times Bestseller. 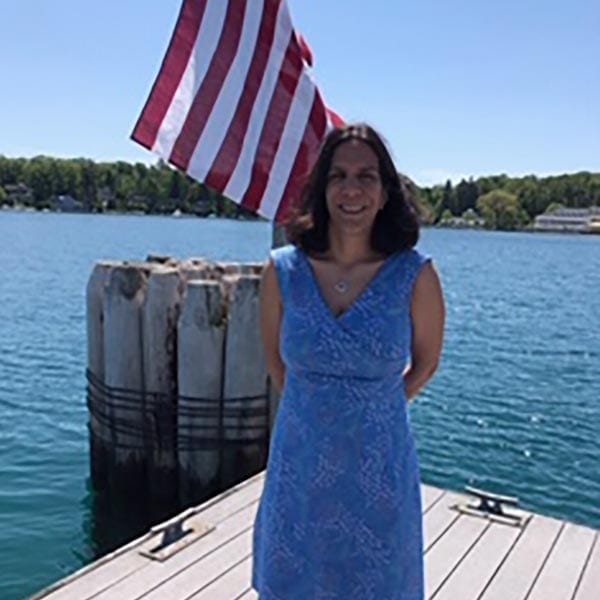 I came to Land Yoga almost 7 years ago when it first opened up. I was looking for a regular fitness routine in a place where I would feel comfortable, what I didn’t know is that 7 years later, Yoga would become way more than a fitness routine but for me it is a lifestyle and something which continue to sustain me on a daily basis. As an individual who has dealt with depression and anxiety for a large portion of their life, yoga has been the one fundamental thing which has helped me the most with these problems, I have learned the power of the breath and being mindful, and along the way yoga has been my greatest coping tool!

A few years ago I had the privilege and honor of going through the THAY training to become an instructor, for the past two years I have taught chair yoga to elderly individuals at the Harlem Food Bank.

It is always the highlight of my week, and I love being able to share this gift of yoga with the Elderly.

In my professional life, I am a Geriatric Nurse Practitioner at the New Jewish Home here on the UWS , and active in many volunteer organizations including Achilles International , New York Cares and West Side Campaign Against Hunger.

THAY Thanks our Sponsors

SIGN UP
FOR THE
THREE AND A
HALF ACRES YOGA